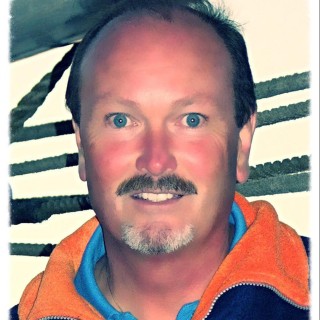 “You like it?” he barked in a deep, raspy voice that screamed Southern-born and Southern-bred. It startled me a bit since he’d walked up from behind.

“Twenty-nine Ford woodie,” he said proudly. He wore a Caterpillar hat and managed to make denim and flannel look smart on a crisp Saturday morning. He’d seen me down on one knee in the parking lot, snapping an iPhone picture of the license plate and came out to chat a spell. I’m guessing he was probably about as old as his 86-year-old classic.

“Found it in a barn up in Blairsville and had to have it. Here, let me show you something. You’ll like this …”

He opened the driver’s side door, retrieved a smallish photo album and handed it to me. “Go ahead, take a look.” I flipped through about 50 pictures that showed a rusted-out relic that was little more than a door-less half-cab, chassis, and some broken, rotted wooden uprights — a busted shell of its glorious self back in the roarin’ ‘20s.

“Bet you got it for a song in this condition,” I said.

There were shots inside the barn, close-ups of what passed as an engine, and pictures of a dashboard missing various gauges and dials. He’d taken the car down to its bones and the back-end of the book captured the step-by-step process of reclamation, including the precise woodworking that took place once the metallic shell and the components it housed had been restored.

“I used cheap plywood underneath to get a sense of the pattern before swapping it out for …” and he mentioned some type of wood I hadn’t heard of before. The square grid work was neat and even and the grain patterns of the wood had been carefully matched. It was stained a honey color under what must’ve been a dozen coats of marine-grade shellac.

It glistened on a bright, sunny morn.

“You did all this yourself?” I asked.

“Yep, every bit of it. Took me four years. I like to take her out about once a week but now there’s so much more traffic, it’s not as easy.”

His relationship with “her” began 20 years ago but it was another “her” that really mattered. Someone he probably wishes he could still take out once a week.

“My wife’s got Alzheimer’s,” he offered, out of the blue. “Been in a home for four years but I still go and see her every day. She doesn’t know I’m there. But I know I’m there. I never miss a day.”

I asked him how long they’d been married and had barely gotten the question out when he stood a little taller and said proudly, “Sixty-three years.”

“Think it will last?” I asked. He chuckled.

Then his tone shifted.

“Alzheimer’s is a terrible, terrible disease,” he said looking away, his voice trailing off. I sensed his composure was ebbing a bit. “She can’t move her arms or legs anymore and she doesn’t know who I am or when I’m there.”

“Does she ever have days when she’s lucid for at least a little while?” I asked, comfortable that he wanted to share his story and I was in no hurry myself.

His name was “Bobby” and he’d stopped in for a biscuit and a cup of coffee on a Saturday morning before, you guessed it, he went to see “her”. Unfortunately, this wasn’t the type of “her” that could be lovingly restored like he’d done with the ’29 woodie wagon. There’s something innately cruel about being able to bring a vehicle back to life but not being able to do the same with your life’s partner, your sweetheart of six decades.

We shook hands and parted. And I walked away the better for it, having met Bobby and hearing his story.

He never misses a day … but he misses her.